Create is a multi-purpose WordPress theme that gives you the power to create many different styles of websites.

About our trademark symbol 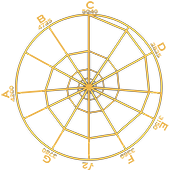 The full circle of 360 degrees represents the unbroken chromatic Octave. Within this space the intervals are fixed mostly by low-integer ratios. We have 2/1 the pure Octave, 3/2 the pure fifth, 4/3 the pure 4th, 5/4 the pure major third, 5/6 the pure minor 3rd. To represent these relationships mathematically we pick a fixed point for the note C, to which we assign the number 7! or 5040. Any number would do but 5040 is divisible by many other numbers and thus is a sensible choice to express low-integer ratios. For example, 3/2 = 5040/3360; 4/3 = 5040/3780; etc. We then calculate the logarithm of a given ratio to the base of 2 and multiply the result with 360 to obtain the angle of a given spoke on the wheel. For example the note G in this system is 3/2 which following this formula results in a spoke angle of 210.59 degrees.

In this way any temperament and tuning can be visually expressed and compared. Equal temperament is based on contemporary thinking of 'ultimate non-differentiation', which is also exemplified by ground meat, particle-board and democracy. Equal temperament is the only tuning where the angular distance is always 30 degrees to any neighboring spoke. Thus they attribute equal.

However all civilizations up until this current one recognized the fact that nature derives diversity from inequality. This understanding also entered the division of the octave and consequently all musical systems up until the middle of the 19th century were unequal. It may also be useful to distinguish between temperaments and tunings.

Tunings are based on philosophies and concepts. For example there is the mean-tone tuning, which is based on the importance of the major third. The most well known tunings are Pythagorean, mean-tone, and Equal. To this we can add the tuning that is represented in our symbol, which expresses the concept of harmony through relatedness. Neither one of these systems are concerned with music per se. It is temperaments that are concerned with the practical application of these ‘pure’ systems in music and how to make them sound good. And so the myriad of temperaments is the result of musicians and musicologist tweaking and tugging on notes in the circle of octave to arrive at some practical compromise. Just as Kepler never found the harmony of the spheres the search for the perfect tuning is also be in vain. Every tuning system and every musical temperament has its limitations. Perhaps Equal Temperament being the result of ‘Enough is enough let’s make them all equal’ is as perfect as it gets.

The temperament that is represented in our Logo, which we call the ‘Symmetrical tuning’ may be the worst of all when it comes to making good music. For all practical purposes it is essentially confined to one key signature only. C-Major is the favored key but it is essentially limited to this scale and its modes. In this key it should sound very good. Should, because in practice this tuning has never been used.

The point of this tuning is to express some of the fundamental cosmic laws that are often found in Nature’s designs itself. An example of this is the analysis of any tone and its breakdown into overtones. The tuning can amongst other ways be derived from the series of overtones which are low integer multiples of the fundamental. But these same frequencies are also multiples of intervals. For example if we had a tone with a frequency of 110Hz it’s overtones are 220Hz, 330Hz, 440Hz, etc. The pure 5th above this tone would be 110Hz x 3/2=165HZ with it’s own overtone series of 330Hz, 495Hz, etc. We can see that the 3rd overtone of the 1st tone is the same pitch as the 2nd overtone of the 2nd tone. This can be expressed as the integer ratio of 3/2, which is one interval of the Symmetrical tuning. Classic architecture based of the Greco-Roman tradition uses this and other low integer ratios frequently. The result is what one might call ‘objective beauty’. Objective in the sense that effect on the beholder is always or nearly always the same regardless of whether the onlooker likes or dislikes the piece in question.

In traditional organ building these same ratios appear in pipe scaling and case design. For example the organ-builder Brombaugh used the Fibonacci series for the diameter ratios of the C’s. The illustration shows an organ case, which is based on low integer ratios. Here, the ratio of the overall dimensions of the case are 5/3. Other ratios are used for panels and case sections. 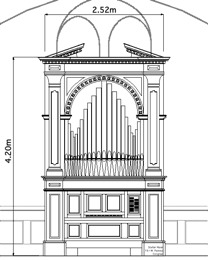 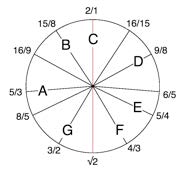 Symmetry played a bigger role in ancient and classic architecture than it does today. The Symmetrical Tuning acknowledges the importance of symmetry. The symmetry axis of the symbol is the C-Fs line. F-sharp, the tritone, is the only interval that is not expressed as a low integer ratio but rather by an irrational number, the square root of 2. Incidentally this is also the only place other than C where the Symmetrical Tuning lines up with Equal Temperament. This may be of little significance. What matters is that this line is a mirror. Each note on the right side has its mirror counterpart on the left side. The 5th (3/2) is the mirror of the 4th (4/3). The minor 6th (8/5) is the mirror of the major 3rd (5/4). The 6th (5/3) is the mirror of the minor 3rd (6/5) and so on. Notice that the product of these pairs is always 2/1. Because of this mirrored layout the name Symmetrical Tuning was chosen.

Not enough is understood about the power of limits in the context of chaos, in other words the relationship between order and unlimited possibilities. Not enough is understood about harmony in the context of Unity and Individuality. Without delving into the vast arena of applied philosophy we can show one phenomena on this topic with our logo. Suppose a time when the octave was not yet named ‘octave’ and was not yet divided into intervals. At this point the possibilities for dividing the ‘octave’ were endless. The word octave is used here only for lack of a better word, it of course presupposes a division into 7 where the 8th or octave is the beginning of the new pattern which resembles the parent pattern. At this stage the word octave should be replaced by the word ‘Whole’ however in our familiar western musical terminology this interval has always been called an octave. We can picture octaves with 5 fixed points, 7 fixed points, 10 fixed points, 12 fixed points and many more. If we commit to limit our possibilities to say 7 fixed points we still have to define were exactly these 7 points fall. Through limiting ourselves to a fixed number of points on the circle of the octave and defining a musical system, that is to say a tuning we are now able to build musical instruments and tune them and we are able to write music and play music. This process of limiting possibilities for the benefit of concreteness can be found in almost everything that surrounds us. It is one of the things that is so common that we are generally not aware of it.

Tunings and in particular the symmetrical tuning apply to more than music. For this reason tunings should not necessarily be evaluated on their ability to organize sound but first and foremost on their philosophical expression and their universality.

Temperaments, on the other hand are concerned with the practical side of things, with deviation from the ideal for the benefit of practicality. This resembles the dichotomy that we often find ourselves in. The ideal and perfect on the one side and the practical, doable and achievable on the other. The compromises that we choose on a daily basis are what we call our life. Both are in our nature, both are human and both are needed.